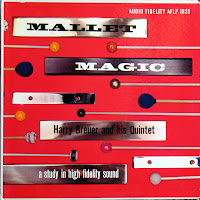 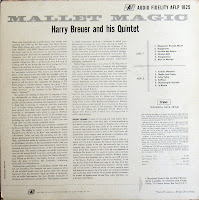 Back in the 90's I was one of the horde of people who got sucked into the whole lounge music craze. I bought at least 10 of the Ultra-Lounge CD's from Capitol records as well as some other compilations featuring words like "cocktail" or "bachelor pad". It was like discovering a whole new world of music. And by that I really mean a whole new world because much of the music sounded like it was from a different planet. Sometimes it was space age themed, but other times the music was so happy and gleeful that it just didn't seem to relate to any world I knew growing up. Well eventually I played those CD's to death and like a lot of things I moved on. But then I got into buying records. At first I looked for albums by artists that I knew from those CD's or for album covers I found entertaining. Then I realized that there must be more music out there than what I had sampled on those CD's so I began rolling the dice and buying records by artists and orchestras I didn't know at all. And what I discovered was that putting those compilations together must have been very hard and yet very rewarding because there was a lot of junk recorded. Pretty much nothing has changed in the record business. But that makes finding the gems all that more rewarding. You really get a great feeling of discovery and you want to just share it with anyone who will listen.

Well, today's record is one of those cases. I didn't know anything about the orchestra, but from the moment the needle hit the vinyl I began falling in love with the record. As you would think with a title like "Mallet Magic" it feature a lot of xylophone. It also lives up to the title in that it does have a magical quality. The happy spirit of the music is infectious. Like much of the other lounge music that I love it has an other worldly quality. Here in the 21st century it is hard to imagine music that is so optimistic and happy. It's almost as if it were made by happy little elves.

The playing if of course amazing. I wish I could see the actual playing of the instruments.

Another texture that was popular at the time and I simply love is the organ that underlies a lot of the orchestrations. I think that also adds to the outerspace quality. I know that may sound weird and it may not even be an accurate way to describe it, but it's all I can come up with.

I won't take up space walking you through the songs. I think it best to leave that surprise up to you as you listen.

Or the whole thing here.
Posted by Spencer at 8:00 AM

Something I Saw Today - My Daily Photo Blog

If anyone has a problem with anything on this blog and would like it removed because they feel it infringes upon some copyright please let me know and I will happily remove it. I'd rather do that than have the entire page deleted because of a complaint to Blogger.

I am sad to report that mediafire has locked my account and so all links on the sight are dead for now. Until I find a new service where I can store my files I can't share any of the music you see on the blog.

Other Great Music Blogs I like. They Put me to shame.

Podcasts Worth checking out